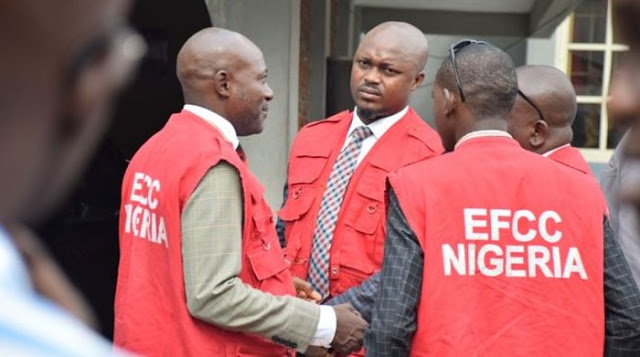 He was dragged before a Kano State Vacation High Court under Justice Farouk Lawan.
EFCC Head, Media and Publicity, Wilson Uwujaren said this in a statement in Abuja.
Uwujaren explained,


“The petitioner alleged that the suspect approached her, presenting himself as a contractor with Dantata and Sawoe Construction Company with the need of a partner to assist and invest in the business of supplying sand and bitumen which she obliged and invested the sum of N4,300,000.00 only in anticipation of the monthly returns as promised by the suspect.
“But she only benefited for three months when the suspect stopped paying her as agreed. Instead, he issued her a Dud Cheque and all efforts to recover both her capital and outstanding profits proved abortive”.


”That you Sadiq Ibrahim sometime in March, 2018 at Kano within the jurisdiction of this Honourable Court, while being a contractor with Dantata and Sawoe and in such capacity entrusted with the sum of N4,300,000 (Four Million, Three Hundred Thousand Naira) belonging to Rabi Adam, for the purpose of investment in your contract with Dantata and Sawoe, with intent to defraud failed to remit the monthly profit on investment, committed criminal breach of trust in respect of the said remittance and you thereby committed an offence contrary to and punishable under Section 315 of the Penal Code”.

But the accused person reportedly pleaded not guilty to the charge against him.

It was on this premise that the prosecution counsel, Michael Ojo asked the court for a date for the commencement of trial urging, that the accused be remanded in prison custody.

In objection, however, the Defence counsel, J.A Jazuli prayed the court to hear their bail application.
In his ruling, presiding Justice Farouk Lawan granted the accused person bail in the sum of N250,000,000 with one surety in like sum.

He ordered that the surety must be a responsible person in the area where he lives and has a landed property within the Jurisdiction of the court or a civil servant of either State or Federal government who must present a letter of introduction from his employer.

The Judge added that the identity card and passport photograph of the accused are to be attached to the bail bond.

But the defendant was to remain in the EFCC custody pending the fulfillment of his bail condition.